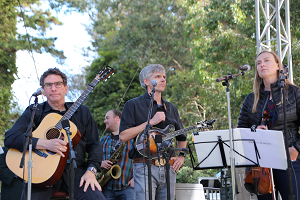 The Wronglers made their stage debut at the world famous Hardly Strictly Bluegrass Festival in 2006, and quite literally had so much fun playing on stage that they just couldn’t stop. Their combined bluegrass, folk, and old-time techniques produce an intimate sound with an abundance of twang. In 2011, they made their second CD, this one with the Lubock progressive country legend Jimmie Dale Gilmore of the Flatlanders. They’ve performed at SXSW, Prairie Home Companion, Freight and Salvage, and other venues across the country. Since founding member Warren Hellman’s passing, the Wronglers can still be found making music at local farmers’ markets, benefits for nonprofits and in in their living rooms. The band’s motto is “Simple tunes played by complicated people”.