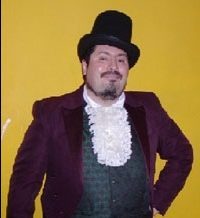 This workshop will examine community (or “country”) dances done in the USA between 1800 and 1900, found in English-language sources. Dances may include Sicilian Circles, squares, and longways dances. Anticipate changing partners after each dance, and although roles are “gents” and “ladies”, anyone may be in those roles.  Live music will be provided by Transit of Earth, a SF Free Folk Festival favorite dance band!

Caller, choreographer, and community leader Alan Winston started with Regency dance in 1978 and has been dancing contra since 1985. He’s been calling Regency, English, Early American, and Victorian dance since 1985, and started calling contras in 2006; since then, he’s called all over the greater Bay Area, Oregon, Washington, Los Angeles, at the Scout House in Concord, MA, at the Jamaica Plain gender-free English, and has become the booking coordinator for the Palo Alto contra. Alan’s historical interests have led him to reconstruct dances from original texts as well as learn dances from others reconstructions.

His clear, cheerful, and witty instruction have served dancers well at a variety of venues including science fiction and romance writer conventions, Pie Ranch, weddings, Stanford Founder’s Day, a residential Victorian weekend, Playford Balls on both coasts, Williamsburg, VA, the San Francisco Free Folk Festival, the New England Folk Festival (NEFFA), and as a staff member at BACDS Family Week, Heather and Rose gender-free English/Scottish weekend in Oregon, and Queer Contra Camp in Aptos. He has led dances for Civil War-era reenactors throughout Northern California. It is Alan’s great joy to share the joy of community through country dance.