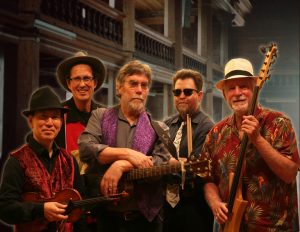 Blind Lemon Pledge, the Bay Area’s premier acoustic Blues band, is returning to the San Francisco Free Folk Festival for a musical evening of original blues and blues-based gospel.  In this concert, “The Sacred and The Profane”, the regular members of the Pledge quintet will be joined by special guests from The Good Intentions Gospel group to present a unique blend of secular and religious songs, united by the distinct award-winning songwriting of band leader Blind Lemon Pledge (aka James Byfield).

Formed in 2008 through a Craigslist posting, the band was originally conceived as an organized blues and Americana jam. However, the idea of a performing band soon took shape and Blind Lemon Pledge was born. James Byfield took the name from an old Martin Mull routine and adapted it as both his stage name and the name of the band. And, in 2015, Byfield trademarked the name for professional purposes.

The band was patterned on the blues string bands and jug bands of early 20th Century America. Says Byfield, “I have always loved this kind of music and the spirit that goes with it. One thing that impressed me is how those bands would cover popular songs and other genres of the day by adding their own funky vibe to the music. We incorporated that cross genre exploration into our own repertoire.” In any given set, the band may cover several genres – blues, folk, Americana, early jazz, and re-imagined pop tunes; and, of course, a sprinkling of their critically acclaimed blues and Americana influenced original songbook – all stamped with the distinctive Blind Lemon Pledge sound.

A few years of experience and a few fortuitous personnel changes eventually resulted in the current band which has a truly different sound all their own: part blues, part rock, part New Orleans, part country, part modern folk … and all fun. Complementing this eclectic repertoire is the band’s unusual instrumentation: with 6 string and bottleneck guitars, violin/fiddle, harmonica, upright electrified bass, and cocktail set/cajon percussion.

Blind Lemon Pledge has earned a reputation for their fun shows and impressive musicianship as they play all over the Bay Area. Additionally, since 2009, drawing on the talents of band members and other musicians, James has released a series of solo albums under his stage name, receiving international airplay and critical acclaim, as well as songwriting awards and commendations. This concert will be featuring some of the music from his recent 2018 re-release “Evangeline” which will be available at the information desk. And in the gospel portion of the show, the musicians will be performing James’ “Give My Poor Heart Ease” which received two Best Gospel Song Awards in 2017.

The band hopes you will come by and experience the unique music of Blind Lemon Pledge. For a preview please check them out at: http://blues.james-creative.com/02.html