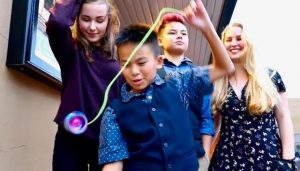 Jubilee consists of some of the top young, acoustic musicians in California. Ranging in age from 11-15, they bring a fresh approach to traditional bluegrass and old-time tunes. As members of other bands, they have each performed at many venues, including CBA Father’s Day Bluegrass Festival and the Freight and Salvage, as well as at IBMA.

Brothers Miles (age 14, on fiddle and vocals) and Teo (age 11, on mandolin and vocals) Quale, who are state fiddle and mandolin champions and national runners-up in fiddle, have been featured on KQED’s The California Report, performed at venues such as IBMA’s World of Bluegrass Festival and CBA’s Father’s Day Bluegrass Festival, and have toured with sibling music duo and mentors, Tashina and Tristan Clarridge. They’ve performed on stage with bluegrass band Sideline and renowned guitarist George Cole, and their former band, Rambling Minors, opened for fiddler Michael Cleveland.

Twin sisters Aerie (cello) and Tuki (fiddle, vocals) Walker, ages 14, are proud alums of Freight and Salvage’s summer program Fiddlekids and have made guest appearances with an eclectic variety of fiddlers ranging from Hanneke Cassel and Mads Tolling to Alasdair Fraser and the Scottish Fiddlers. They appear with Daisy Kerr as “Daisy Kerr & the Walker Sisters” and have just finished a new CD with their Celtic band, “Where to Now”. Aerie now studies with Tashina and Tristan Clarridge and toured with them last spring. Aerie also plays a mean Texas fiddle! Tuki comes to bluegrass by meandering way of Celtic fiddle and jazz. She has appeared in “Jazz in the Neighborhood” with her mentor, jazz violinist Mads Tolling.