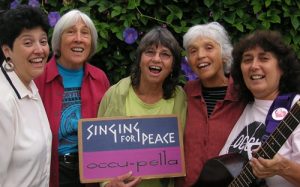 Occupella will lead songs old and new, to bring hope through song in these dark times.

We have an extensive online songbook of singable parodies, rewrites and traditional songs and some original songs.

The group is the creation of Bay Area singers and cultural workers Hali Hammer, Betsy Rose, Nancy Schimmel, Bonnie Lockhart, and Leslie Hassberg. Drawing on years of experience as singers in activist cultural groups such as the Freedom Song Network, Red Star Singers, and Singing For Peace, Occupella carries forward a long tradition of communities singing in the face of injustice and promoting positive visions of a world of peace and inclusion.