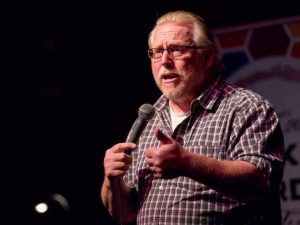 Dave Pokorny will emcee an hour of talent from local swap groups. All swap groups invite others to join and participate in the fun in their regular swap times!

Dave Pokorny actually quit his day job, and hit the road, making a living as a stand-up comic in the ’90’s. After becoming house emcee at San Francisco’s top club and a regular in Vegas, he gave it all up to pursue a lucrative career as a stay-at-home dad. He returned to the stage a changed man with more to say than, “Because I said so, that’s why.”