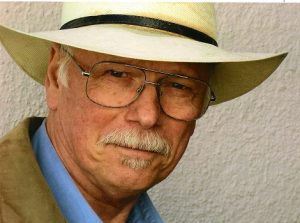 Ray Bierl has been performing music from across the broad American landscape for well on to five decades. He’s a musical storyteller who draws on a wide range of genres and styles–cowboy ballads, Appalachian fiddle tunes, vintage rock and roll hits, Tin Pan Alley songs and country classics–delivering a travelogue not just of places, but of time, human emotions, and imagination.

“No one knows how to weave you into a song quite like Ray Bierl.” – Tom Waits

“Every song Ray chooses becomes his own, fresh and personal. He’s a great storyteller.” – Laurie Lewis

Ray is also an accomplished and engaging fiddle player, drawing on traditions from throughout North America and the British Isles. As a square dance and contradance musician he has been in demand in the San Francisco Bay area and beyond for his inventive and playful approach to traditional and contemporary dance music. He has performed for 25 years with the well-known Hillbillies from Mars, and more recently with the band Swing Farm, as well as in countless informal ensembles.

“He as selected some great tunes and executes them with flair, style, and all the essential ornaments and phrasing that make those styles what they are” – Kerry Blech