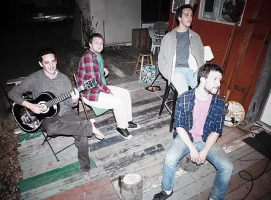 Grit Harbour is a folk rock band out of Los Angeles, delivering a unique sound that blends elements of rock, folk and indie alternative. The band features James Markas on lead vocals and rhythm guitar, Corey Klass on lead guitar, Edwin Marston on bass, and Quincy Markas on drums, each a multi-instrumentalist both in the studio and on stage. The band evolved from an innate musical chemistry that they discovered while experimenting with James’ father’s reel-to-reel tape recorder: the first few songs were nothing short of magic, and they knew they had a responsibility to their muse and to each other to find out where it was all going to go – for the love of the music as much as the creative energy that they derive from each other. Their style and performances have gained fans throughout the region and continue to captivate audiences at every show. They take influence from iconic artists such as Bob Dylan, The Beatles, Marvin Gaye, Nick Drake, The Rolling Stones, and The Doors.