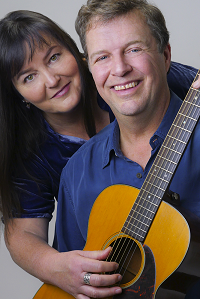 While Mark Lemaire’s virtuoso solo guitar pieces stand as complete statements, his harmonies with Cindy are so perfectly matched that they seem like two people with one voice. They tour the world, performing in 2018 from New Zealand to Scotland to Canada, as well as here in the states. Mark’s other life is recording engineer and producer for clients ranging from Jimmy Miller (Rolling Stones, Blind Faith, etc) to the San Francisco Symphony and, of course, everybody in between. Mark also occasionally writes about himself in third person.

“Lemaire has received critical kudos from the industry as well as his musical peers. Performing with Cindy Lemaire, the blend of voices adds a perfect exclamation point to Mark’s virtuoso guitar playing and songwriting.”
– The Pasadena Weekly

“Mark and Cindy’s stellar harmonies simply mesmerize, silencing the audience who hang on every note. I’ve seen a lot of acts, but the harmonies of these two are so aligned and balanced, I felt as though I got an audio ‘tune up’ inside me after listening to their songs.”
— Kiki Wow Presents, Carmel, CA

“It was an impeccable performance. Never have I witnessed such control of the steel stringed guitar’s sound. This was a flawless show.”
–Mark Twang, Folkways Recordings