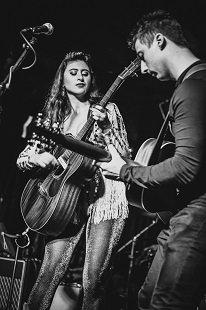 MAAYAN performs solo, accompanying herself on guitar, as well as in duo format with jazz/bluegrass guitarist John Paul Michael Todd. On select tours and festivals, MAAYAN delivers a full band performance with, which includes drums, bass, electric and acoustic guitars and occasionally pedal steel guitar. When accompanied by her kickass band, they deliver a rebellious blend of folk and pop with middle eastern influences.

MAAYAN’s musical journey started out with a punk/grunge band she formed in middle school, and collaboration with Israeli hip-hop deejay and producer Ori Shochat, the single Turn The Music Up (2008). After relocating to Brooklyn, she recorded over three albums’ worth of songs over the span of two years and studied electronic music production and sound design at Dubspot, New York. In early 2013, she founded Oppenheim Music Inc. and released an indie/elelctronic dance music EP In Too Deep. She followed up with rock/world/blues album Science Fiction in 2014, produced by Ofer Ekerling, featuring acclaimed musicians Yossi Fine and Yaron Gershvosky.

In 2015, MAAYAN began performing and busking all over NYC leading up to her 2016 tour. The MoonFire Tour had stops in Denver, SLC, Boise, SF, and LA, later adding dates and radio interviews in Israel. During the tour, the single Way To You was recorded at Sunset Sound Studios in Hollywood, CA. Maayan then went on to record her songs Your Lightning, Golden Rush, and Got to Go (California) as part of a new album. Meanwhile, she launched her 2017 Lightning Tour, with radio appearances on KPOO 89.5, FCC Free Radio, and headline dates in the Bay Area, LA and Reno NV.

MAAYAN supported folk/Americana trio the T Sisters at The Saint in Reno, Eric Tessmer at the Boom Boom Room in SF, Holly Miranda at The Milk Bar, SF, and Olivia Jean at Bottom of the Hill, SF. The single Way To You became a finalist on the International Acoustic Music Awards.

In 2019, Maayan joined as a board member at California Women’s Music nonprofit and co-producer at California Women’s Music Festival. Her involvement in the music community has been an inseparable part of her musical journey. She’s hosted and produced weekly showcases in New York City’s lower east side, and select events in San Francisco, created a network of like-minded performers “Folkers on the Rock”, aiding them with booking, consulting and music production. Maayan continues to help others grow alongside her, as she spreads her music far and wide.