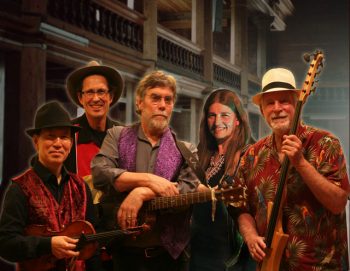 A special performance for our 2021 online festival! Watch the performance anytime on festival day by clicking on this link, then clicking PLAY ALL:   https://www.youtube.com/playlist?list=PL1g13A62mPJSQ0YQx6AdlIAYq51_vkoZB .

A steaming bowl of Delta and Chicago blues, a dash of New Orleans, a taste of country, and a teaspoon of rock, all flavored with a unique songwriting sensibility, create the tasty gumbo that is Blind Lemon Pledge. This San Francisco based quintet, featuring bluesy vocals, guitars, bottleneck slide, fiddle, harmonica, bass and percussion, plays a unique combination of blues classics, early jazz songs, re-imagined rock/pop standards, and crowd-pleasing, critically acclaimed originals. This modern blues string band pays homage to the great pre-WWII blues ensembles and the free-wheeling spirit of old time jug bands, while adding a decidedly modern approach to the great music.

The band was originally formed in 2008 by eponymous band leader and bluesman Blind Lemon Pledge (aka James Byfield). A few years of experience and a few fortuitous personnel changes brought in some of the top players in the area and eventually resulted in the current band, which has a unique sound all their own: part blues, part rock, part New Orleans, part country, part modern folk … and all fun. Although influenced by old time blues, the band incorporates elements of Americana, jazz and popular music with a healthy dose of the their award winning, critically acclaimed blues and Americana influenced original songbook.

With an ever-expanding repertoire of over 70 songs, Blind Lemon Pledge brings their unique blend of classic songs and crowd-pleasing originals to appreciative audiences throughout Northern California.

In addition to his duties as band leader, Blind Lemon Pledge has released a series of albums, with band members and other guest musicians, that charted internationally and received much critical acclaim.

Combining original songs with a time-tested repertoire of classics, the Blind Lemon Pledge band brings a foot-stomping, crowd-pleasing evening of entertainment to any venue. Visit them on the web at: www.blues.james-creative.com, www.facebook.com/blind.pledge, www.reverbnation.com/blindlemonpledge or email them at blues@james-creative.com.