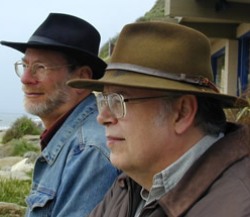 Peter and Richard will be singing chanteys and other types of maritime songs, and will give historical background information to each song. They invite participants to also lead songs.

Peter Kasin and Richard Adrianowicz became a duo in 2003, and have recorded four albums of sea music together. Richard sang in a number of folk music groups, the most prominent being the trio Out of the Rain, and has performed solo at the Chicago Maritime Festival, and with Peter at the Mystic Seaport Sea Music Festival, in Connecticut, the South Street Seaport Museum in New York, the Festival of the Sea in San Francisco, and at numerous other venues in the Bay Area.