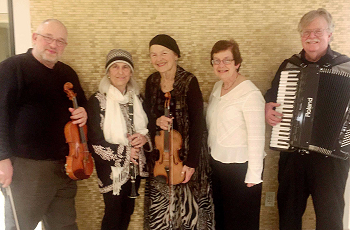 A special performance for our 2021 online festival! Watch the performance anytime on festival day by clicking on this link: http://www.youtube.com/watch?v=0B7Nb2mI79Y&t=0m2s

The band will be playing a lively assortment of traditional Klezmer music and other instrumental music and songs brought to these shores from the Old World.

The Ellis Island Old World Folk Band has been delighting audiences for four decades with its performance of klezmer music, the music brought to the United States in the early 1900s by the Jews of eastern Europe.

The band has been honored with proclamations from the cities of Berkeley and Albany, California for its contributions to the community.

Ellis Island will bring laughter to your lips, a tear to your eye, joy to your heart and have you dancing in the (virtual) aisles.