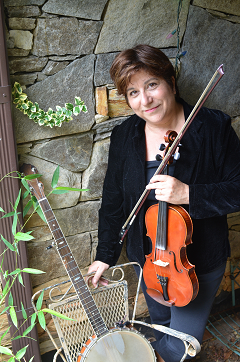 Janie has been creating new tunes in the traditional style for her whole life and will perform a selection of her music on fiddle and banjo, including reels, jigs, waltzes and slow airs. She was awarded the prize for Best Non-Traditional Tune at Clifftop Appalachian Mountain Stringband Festival for her tunes Too Late for the Bacon, and Red Hen, and her tunes are being played at jams and sessions around the world.

Janie is a power-house American fiddler, who also plays clawhammer banjo and guitar. She is widely recognized for her traditional and inventive style, and her in-the-pocket rhythm, whimsical groove, and award-winning original tunes.  She is a full-time touring musician playing concerts, workshops, festivals and dances around the world and online. Janie has been performing, recording and teaching music that is rooted in traditional American and Celtic music since her teens, when she started playing with older generation musicians from New England, North Carolina and Quebec. With over 15 recordings to her credit, Janie has traveled the world with her unique brand of traditional-based music, including the UK, France, Germany, Holland, Australia, Canada and throughout the USA. Janie is also the founder and director (and instructor) of Janie’s Jumpstart Home Based Weekend Music Camps held in homes around the world.