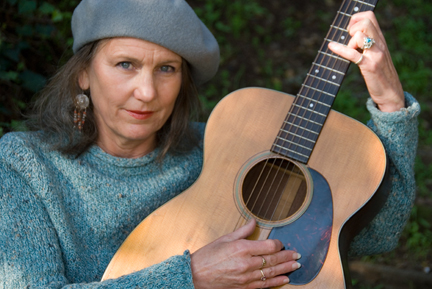 A special performance for our 2021 online festival! Watch the performance anytime on festival day by returning to this page https://www.youtube.com/watch?v=wFcaUDQ9lIk

Jo D’Anna is a solo acoustic folk songwriter who performs heartfelt songs that can range anywhere from evocative, poetic, joyful, reflective, transformational, and or longing. Her guitar chords and melodies are inspired by improvisation (using images from nature), and from that improvisation flow the lyrics in an organic creative process that seems to come from outside herself. Her fingerpicking/strum guitar style is influenced by her early teachers — Jerry Garcia, as well as Carol McComb of Gryphon Stringed Instruments, both of Palo Alto — but she also has devised her own folk-style finger-picking method which is gentle, folky, harmonizes with the vocals, and often is varied with different strum rhythms.

Originally from Palo Alto where Jerry Garcia was her first guitar instructor at Dana Morgan’s Music in 1962, Jo D’Anna is a native bay area songwriter, now living in a tranquil coastal valley of West Marin. She started writing songs in 1990 when she joined West Coast Songwriters and received several songwriting and performance awards since then. She first began performing solo in the greater bay area in 1993 (coffee house venues, listening rooms, local folk festivals, local farmer’s markets, songwriter showcases, house concerts, live radio, musician volunteer at UCSF and Bread & Roses, etc.) and then released her first album, “Alouwenja” in 1995, followed by her 2nd album “As She Is” in 2007, and her EP, “Two Roads” in 2018. During the COVID-19 shutdown for the past year, she has been doing online gigs on Zoom and a pre-recorded video performance for the El Cerrito Folk Festival in October 2020. Also, she began an online “Song Anthology Project” on her YouTube Channel on November 15, 2020, in which she has been premiering one original song video per week.