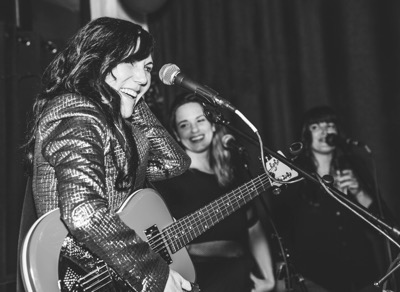 A special performance for our 2021 online festival! Watch the performance anytime on festival day by clicking on this link: https://www.youtube.com/watch?v=Hq8pLA105ds

From electrified rock & roll to rootsy Americana, Pi Jacobs has chased her unique muse with bluesy, unforced vocals and sharply observed songwriting. In 2015 she met and signed with the Travianna / Mountain Fever Group Label, and released “A Little Blue” to great critical acclaim, and multiple tours across the US and Europe.

With 2020’s Two Truths and a Lie, Pi turned her focus to stories of female characters (both fictional and historic), who’ve rallied against violence, injustice, and their own inner demons. Some of these stories are directly about Pi… and some are not. Just like the game “Two Truths and a Lie,” the listeners get to solve the mystery and meet some amazing women in the process.

Two Truths and a Lie was released on Travianna Records / Mountain Fever Music Group, Feb. 21, 2020, and has been featured on DittyTV, NPR, Austin Music TV, American Songwriter Magazine, and nationwide radio including LA’s tastemaker KCSN, and NYC’s WFUV, reaching #27 in the Alt Country Chart and #25 in the Relix/Jamband Chart.

“..a sultry, feminine, outlaw kind of sound” American Songwriter
“the ease and wisdom of greats like Dolly Parton and Kris Kristofferson, she belongs in their company.” Rock and Blues Muse

“nothing here that doesn’t impress at every turn. Hot. This’ll do to you what Lucinda’s white album did to you.” Midwest Record

“Divorce…whiskey…legal problems…cheaters…lies. Whatever story comes next, it’s going to be a good one.” Twangville