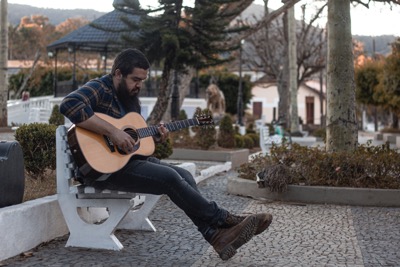 A special performance for our 2022 online festival! Watch the performance anytime on festival day by following this link: https://www.youtube.com/watch?v=S0h4GOHOK3U

Gustavo brings his original fingerstyle guitar from Brazil to the SFFFF.

You’re in for a treat when you gather round Brazil’s Gustavo Fofão’s guitar. His fingerstyle music is made for one purpose: to increase joy and beauty in the world.

Fofão fell in love with his big brother’s guitar at age 9. Within a year, his brother lost interest, but for Fofão, the instrument was a playground to explore. He wouldn’t just strum it, he would twist the knobs, thump it, play it “wrong.” For Fofão it was an organic process, not just learning how to play, but learning how to be one with the guitar.

Then YouTube came along, and Fofão found kindred spirits in Justin King, Andy McKee, and Don Ross. He learned that his natural technique had a name – fingerstyle – and he began composing and playing in bands with friends.

Fofão entered college to study engineering, but in class, while his friends were taking notes, he was counting the minutes until he could get back to his guitar. His friends played sports, too, but he just went home to play guitar. Fofão did join in when they went to parties … because he always ended up playing guitar. It was obvious he was in the wrong place.

A month after leaving school, Fofão heard about an opportunity at Cifra Club, a Brazilian music website that had just decided to offer online lessons. Out of hundreds of applicants, four were chosen to create the online lesson program — and Fofão was one of them. A kid who had never had a formal guitar lesson in his life.

Fofão stayed with Cifra Club for 12 years, and his lessons have received millions of views worldwide. He formed a Celtic band in Brazil, which has toured on other continents. This year, he signed with the Sonasterio label, to finally record his original innovative tunes for the world to enjoy.