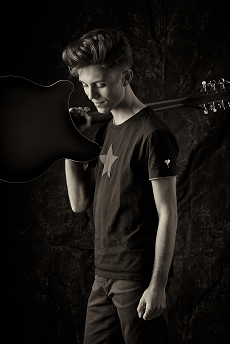 Matt Jaffe’s set will be an acoustic performance of original songs inspired by writers like Billy Bragg and Joe Strummer. He intends to invite other musicians to complement his guitar and voice, to build on years past, and to augment his material.

After cutting his teeth on open mics around the Bay Area, San Francisco songwriter Matt Jaffe was discovered by Jerry Harrison of the Talking Heads. Together, they produced his first album at the age of 16, cementing Matt’s dedication to music. Soon, he formed a band, dropped out of college, and has not looked back. Since then, Matt has written more songs than he can remember the words to, crisscrossed the country opening for Mavis Staples and Wilco, and co-written with Tom Higgenson of the Plain White T’s. Inspired by the great lineage of rock n’ roll, he marries literary lyrics with the undeniable urge to dance. Having suffered from seizures since 2015, Matt also uses his music to unite local and national epilepsy communities. Matt will be releasing his sixth album, “White Roses in the Snow,” in the summer of 2022.