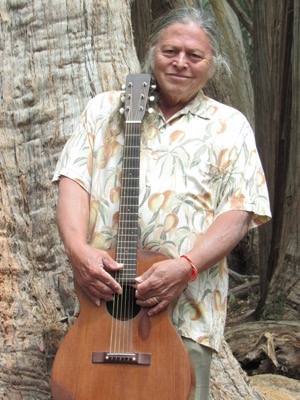 A special performance for our 2022 online festival! Watch the performance anytime on festival day by following this link: https://youtu.be/O71iL10r7Kk

A 45 minute set of live video performance featuring Wes singing and playing poi dog music presented from his back yard garden in Haiku on the island of Maui.

Wes is a local boy from the island of Maui in the middle of the Pacific Ocean who has been gifted with the talent to sing, play music and write some good songs. His roots are in Hawaii where his music has grown into a beautiful mongrel mix of influences just like the people who live there- east, west, Hawaiian, Haole, indigenous, pop, rock, reggae, folk, blues, jazz and whatever else tickles the ears. He is a singer/ songwriter who plays many different stringed instruments, including slack key ( ki hoalu) , modal and open tunings on guitar.

This summer, he will be traveling to Europe, where he has registered to play at the Edinburg Fringe Festival and in Denmark. Spreading that Poi Dog Music around the world!