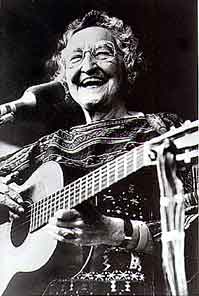 The San Francisco Free Folk Festival has always been run by the San Francisco Folk Music Club. The festival was first presented in 1977 at the Hall of Flowers, where it stayed for two years. It then moved to Fort Mason, where it remained for 13 years, before moving to the John Adams campus of City College until that venue became too small. The festival then moved to Roosevelt Middle School, where we had a long run. We were then at CCSF’s Ocean campus for two years, then at Presidio Middle School from 2009 through 2014. The 2015 Festival was held at Cyprian’s Center, the same site where the Folk Club has its Friday night musical meetings. The festivals from 2016 through 2019 were at Everett Middle School, our most recent venue.  The 2020, 2021 and 2022 festivals were online rather than in person due to the covid-19 pandemic.

2019 schedule of events and photos and video

2018 schedule of events and photos

2017 schedule of events and photos