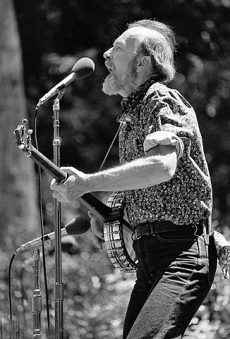 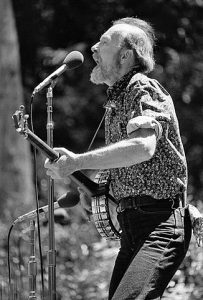 This year, the 43rd annual San Francisco Free Folk Festival is celebrating the centennial of Pete Seeger’s birth with video, discussions and singalongs.

Pete Seeger, an American folk singer and social activist, had a string of hit records during the early 1950s as a member of the Weavers. When Seeger and members of the Weavers were blacklisted during the McCarthy Era, he re-emerged on the public scene as a prominent singer of protest music in support of international disarmament, civil rights, counterculture, and environmental causes. A prolific songwriter, his best-known songs include “Where Have All the Flowers Gone?”, “If I Had a Hammer”, and “Turn! Turn! Turn!”. Notably, Seeger was one of the folk singers responsible for popularizing the spiritual “We Shall Overcome” that became the acknowledged anthem of the Civil Rights Movement. Seeger believed in “the power of song” to bring social change. Billy Bragg wrote: “Pete believed that music could make a difference. Not change the world, he never claimed that – he once said that if music could change the world he’d only be making music – but he believed that while music didn’t have agency, it did have the power to make a difference.”

This year, the Festival will have friends who knew and sang with Pete tell a few stories. We will sing the songs he wrote and brought to us from all over the world. Join in, sing along as Pete would have wanted.