Dan Harper, Terry Moore, and Peter Ross will be leading a shape note singing session, in the traditional square and with different leaders, with loaner booklets available. It will be beginner-friendly, with some explanations but mostly singing, in four parts. 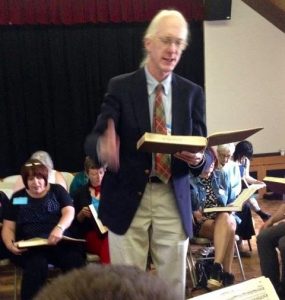 Dan Harper has been singing Sacred Harp since 2008. Traditional Southern singers from Alabama and Georgia have complimented him for his traditional leading. He sings Sacred Harp several times a month, chairs Sacred Harp conventions, and has helped many new singers learn the tradition. Outside of Sacred Harp, he sings with a Palo Alto song circle, a traditional choir, and an a capella quartet.

Terry Moore has sung Sacred Harp music since the turn of the century, having seen a notice in the folknik. He has led workshops for several years in Ben Lomond, chaired Sacred Harp conventions, and regularly participates in the Palo Alto area singings. He also enjoys singing barbershop, gospel, madrigal, and jazz a cappella harmonies. 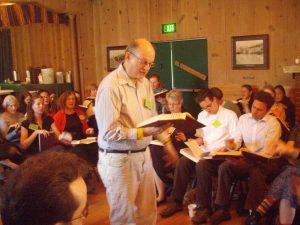 Peter Ross originally got hooked on shape note singing when he attended workshops in the 1990s at the San Francisco Free Folk Festival, due partly to the gorgeous harmonies and the inspiring music. He now sings regularly with the Palo Alto shape note singing group, and occasionally with the Santa Cruz, San Francisco, and Berkeley groups. Also, before traveling, he checks the www.fasola.org website, and has found groups with which to sing in Denver, CO, Madison, WI, Knoxville, TN, Portland, OR, Los Alamos, NM, and Burlington, VT.