Following up on his well-received SFFFF 2017 slide guitar workshop, James Byfield (aka Blind Lemon Pledge) will be presenting a new related session exploring the slide guitar basics of open D tuning (in 2017 we explored open G).

The workshop will focus on scales, riffs, and technique and will culminate in a slide guitar tune to learn and get you started. This is a standalone session and does not require participation in the previous workshop. Previous participants are certainly invited, as this workshop complements the previous one. 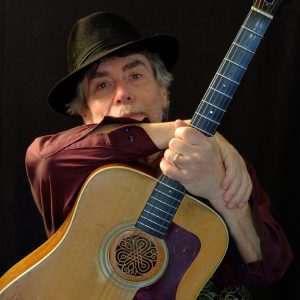 In this workshop, James will be sharing techniques he has learned over several years, regularly performing on the bottleneck guitar.

James Byfield has been deeply involved with music since childhood, and with the guitar since age 14. He performs under the stage name Blind Lemon Pledge with an eponymously named acoustic blues band. They perform an average of once a week all over the Bay Area and will be performing at the festival on the Faith Petric Stage at 6 p.m. Additionally, Blind Lemon Pledge has released a series of internationally acclaimed albums while receiving several awards and nominations for his original songs.