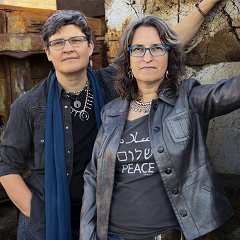 Emma’s Revolution is the dynamic, award-winning activist duo of Pat Humphries & Sandy O, whose songs have been sung for the Dalai Lama, praised by Pete Seeger, and covered by Holly Near. With beautiful harmonies and genre-defying eclecticism, Emma’s Revolution delivers the energy and strength of their convictions, in an uprising of truth and hope for these tumultuous times. Emma’s Revolution has shared the stage with Pete Seeger, Holly Near, Rev Jesse Jackson, Amy Goodman, Indigo Girls, Joan Baez, Rev. William Barber and Bill McKibben. They have also performed at concerts, peace & justice events, and mass demonstrations across the country, including the Women’s March Oakland, the Poor People’s Campaign National Demonstration in Washington DC, and the #FakeTrumpEmergency Day of Action in San Francisco.

Emma’s Revolution’s 2019 shows include songs and stories in celebration of the 100th birthday of Pete Seeger, a friend and mentor to the duo. Pat’s nearly 30-year friendship with Pete spanned performances at NYC’s Symphony Space to helping gather sap from the maple trees on his property to swapping stories and sharing holidays with Pete and his wife, Toshi. As Pat recounts on stage, “I was at Pete’s bedside when he died. When I heard he was in the hospital, I drove up to NY, joining a steady stream of family and friends who came to sing Pete’s songs back to him in gratitude for all the times he had left home to sing to us. As the day and evening wore on, a small circle of family and friends remained. We sang our last songs together, sending Pete off onto his next adventure with our love.”

Revolution Now garnered top acclaim from radio stations across the country focusing on folk and acoustic music, including Top Artist #20 (just after Joan Baez), Top Album #24 (just after Bela Fleck) and Top Song #25 (just after Rhiannon Giddens) for their song, “Sing People Sing”, a loving tribute to the late Pete Seeger who was a friend and mentor to the duo. Winners of the John Lennon Songwriting Contest Grand Prize and the Phil Ochs Award, their songs have been sung at justice events around the world and their music has been featured on NPR’s “All Things Considered” and Pacifica’s “Democracy Now!”