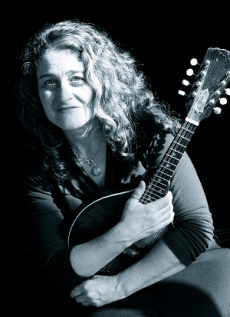 Get the feel of Irish music on the mandolin! Marla will work with woekshop attendees on both right and left hand techniques to express the distinctive rhythmic forms and deliver the pulse of Irish dance music on the mandolin. The focus will be on fundamentals and how they enable musicality and expressiveness in the form — exploring the use of phrasing, ornamentation and variation to give life and lift to the tunes you learn.

A San Francisco native, Marla is one of the prominent voices of the mandolin in Irish music. She brings a deep and distinctive sensibility to the tradition on one of its lesser-heard instruments. She is a dynamic performer and a sought-after teacher. Her dynamic playing is featured on the 2017 Noctambule release A Sweetish Tune, on the eponymous Three Mile Stone recording with San Francisco favorites, fiddler Erin Shrader and guitarist Richard Mandel, and on The Morning Star, a duo CD with legendary Irish singer and bouzouki player Jimmy Crowley released in 2011 — an all instrumental project that features Irish music on an array of mandolin-family instruments: mandolin, mandola, mandocello, bouzouki, and dordan. She has performed and taught nationally and in Ireland, and was a featured performer at the 2018 Masters of Tradition festival in Bantry, County Cork, Ireland.

In addition to the mandolin, Marla plays mandola, tenor guitar, and button accordion. (She had the singular honor to be featured as Miss March in the 2011 Accordion Babes Pin-up Calendar.) She also sings and writes music, and is known for her musical settings of works from a variety of poets. In addition to playing and writing music, Marla is a textile artist. For a look at her work please click here.

Marla’s main musical endeavor is a collaboration with her husband, guitarist Bruce Victor, under the name Noctambule. Bruce and Marla released their debut CD together, Travel in the Shadows, in 2013, and followed it up in 2015 with The Waking. Both recordings feature poetry that they have set to music and arranged for their bevy of strings, as well as original instrumentals – waltzes, a reel and an air. In July of 2017, Noctambule released a new recording, A Sweetish Tune. This album is largely traditional Irish music, with some newer tunes written in the tradition, by Marla and by others, along with a few songs – a traditional Irish ballad, a new ballad, and a poem set to music by Marla and Bruce.