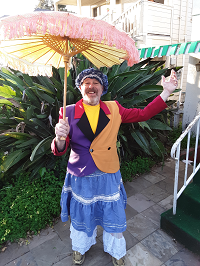 The Mummers Parade is a folk festival, one of the oldest in the US, that takes the form of a parade on New Year’s Day. It is marked by fantastical costumes, a style of string band music, and a dance step unique to itself. While it has deep European roots, and bears a strong resemblance in its costumery to Mardi Gras, it developed its character and many of its customs specifically in Philadelphia. It is pan-ethnic, reflecting on the culture of Philadelphia in general more than on any of the ethnic groups that march in the parade, broader American culture, or the European traditions from which it arose.

Ed Silberman is a singer, storyteller, and harmonica player who has been active with the San Francisco Folk Music Club for many years. He plays with a blend of energy, humor, and insight. His aim is for listeners to feel something unexpected and refreshing when they hear him play.