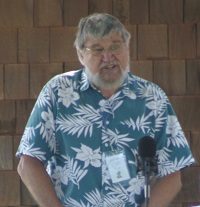 This event will feature songs used at sea that have choruses, with plenty of audience participation.

Dick emigrated to California from his native Sittingbourne, Kent, in the south of England, with his parents and two brothers. It didn’t take long before he fell in love with American country music. He spent hours trying to perfect an American accent with some limited success. He performed old timey music with “Mother Lode & Her Four Diamond Studs” for a few years, but even in those days, he interspersed an occasional British ballad.

As news of the British folk music revival slipped through to expatriated Dick, he started to sing more and more of the songs from his roots. As a solo performer, he developed a reputation as a shanty singer at sea festivals up and down the West coast of the US. and Canada. Dick and Allan MacLeod met at the 1976 Santa Rosa Folk Festival where they were both doing solo gigs. From that point on, they have developed a lasting friendship and lasting musical partnership.

Dick continues to work on his collection of British broadside ballads and enjoys performing California sea songs with his wife, Carol.