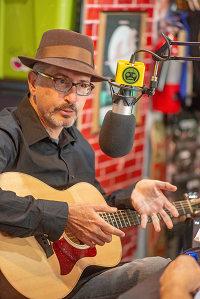 Learn how to use live performances to not only raise awareness, but also effectively engage, recruit, and activate volunteers to take meaningful action. This workshop will provide guidelines for organizing standalone shows and tours, as well as how-to instructions for a proven volunteer recruitment technique called “barnstorming.” Barnstorming is a long-standing method used by grassroots activists to encourage audience members to pledge and take immediate action(s). The workshop will also discuss how to select potential partners (causes, candidates, etc.), media and promotion strategies, and tactics for getting people to the performances. In addition, there will be a barnstorming practicum with workshop participants.

With four albums completed while also performing, touring and activism, Pete Kronowitt’s songs lie at the juncture where culture and passion clash with politics. Following in the footsteps of folk singers advocating to better humanity, Pete has organized, marched and sang his way across this land. Kronowitt’s fourth album, ‘A Lone Voice’, which re-imagines the protest song, was recorded and produced in Nashville by Grammy-winning songwriter Phil Madeira with the core of Emmylou Harris’ band, and was released in Cleveland during the Republican National Convention at a protest charity event he organized. Its songs face uncomfortable truths, tackle injustice, poke at the absurdity of extremism, lift the curtain on the strings of media manipulation, and remind us the power of change is always here and now within each of us. His first album, “Phases of the Heart,” recorded in 1993, was produced by John Alagia, of Dave Matthews Band, John Mayer, and Ben Folds Five fame.

Pete also worked in technology for more than 30 years. He led Intel’s global teams for market expansion and platform growth, and spent the majority of his career engaged in business development, including evaluating potential equity investments with Intel Capital in the open source software arena. Pete is a Fellow with the Playing For Change Foundation and Organizing for Action. He is currently working as a District Captain in Sister District Project.