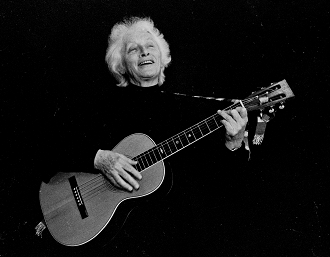 A group of people from the San Francisco Folk Music Club will perform a selection of songs written by Malvina Reynolds, in honor of the 120th anniversary of her birthday. Sing along from home if you know them!

Among the songs written by Malvina Reynolds (1900-1978) are are Magic Penny, Little Boxes, What Have They Done to the Rain, and It Isn’t Nice.

Born of Jewish socialist immigrant parents in San Francisco, Malvina earned a BA, MA and, in 1939, a PhD in English from the University of California at Berkeley. It was the middle of the depression; she couldn’t get a teaching job at the college level. She worked as a journalist and on an assembly line in a bomb casing factory during WWII. She and her husband and daughter moved to Southern California where, in the late forties, she met Earl Robinson, Pete Seeger and other folksingers and songwriters and got serious about songwriting. Her songs were recorded by Harry Belafonte, Joan Baez, Judy Collins, Pete Seeger and many others.