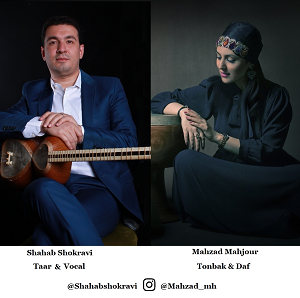 A special performance for our 2021 online festival! Watch the performance anytime on festival day by clicking on this link: https://www.youtube.com/watch?v=piiY0g2Pfbc

Shahab Shokravi plays and teaches Persian folk and classical string instruments including taar and setar.   In today’s performance, he plays the taar and sings.   He is accompanied by Mahzad Mahjour, teacher and player of Persian classical percussion instruments tombak and daf.

Taar is an Persian classical and ancient string instrument, used by many cultures and countries including Iran, Azerbaijan, Uzbekistan, Armenia, Georgia, Tajikistan (Iranian Plateau) and others near the Caucasus and Central Asia regions. The older and more complete name of the tāar is čāhārtār or čārtār, meaning in Persian “four string”. It was revised into its current sound range in the 18th century and has since remained one of
the most important musical instruments in Iran and the Caucasus, particularly in Persian classical music.

Tombak or zarb is an Persian classical and ancient goblet drum. It is considered the principal percussion instrument of Persian music. The tombak is normally positioned diagonally across the torso while the player uses one or more fingers and/or the palm(s) of the hand(s) on the drumhead, often (for a ringing timbre) near the drumhead’s edge.
Sometimes tombak players wear metal finger rings for an extra-percussive “click” on the drum’s shell. Tombak virtuosi perform solos lasting ten minutes or more. The tombak had been used to create a goblet drum.

Daf is a Middle Eastern (mainly Iranian) frame drum musical instrument, used in popular and classical music in Iran. Dafs were part of religious music in Iran much before Sufism. Iranian music has always been a spiritual tool.

You can watch and hear more of Shahab’s music at https://www.youtube.com/channel/UCvDfq8mTIC_7C-aIZGQZRLQ.