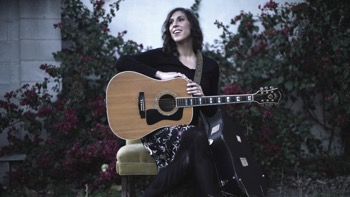 Arielle is a consummate storyteller whose rich, expressive voice and acoustic guitar frame expansive melodies that echo her tours and travels across the American heartland. The daughter of a guitar-strumming architect and a Jewish scholar, Arielle was raised at folk festival fields and in synagogue pews along both sides of the east coast IHOP/Waffle House line. She now lives in California.

In 2020, after a decade-long break from performing to focus on creative writing and Eastern philosophy, Arielle released her fourth album, A Thousand Tiny Torches, which is luminous, literate, and alive with songs that crosscut exacting details of the seismic heartbreaks of ordinary life. Recognized in numerous songwriting contests, including International Songwriting Competition (ISC) and Great American Song Contest, Silver has been heard on tastemaker station 88.5FM KCSN in Los Angeles, and in American Songwriter, Americana Highways, and more.

Arielle is the co-owner of the online Bhavana Flow Yoga studio; is producer and host of the Tomes & Tunes podcast, a weekly livestream book talk and song swap with guest songwriters from around the world; teaches creative writing at Antioch University Los Angeles; and serves as secretary for Folk Alliance Region West (FAR-West). Her concerts and educational workshops for creative spirits of all kinds are moving experiences that tap the heart through music and stories to connect, inspire, move, and heal.