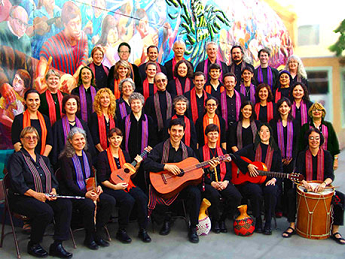 A special performance for our 2022 online festival!  Watch the performance anytime on festival day by following this link: https://www.youtube.com/watch?v=7VFAS1o1Rf0

La Peña Community Chorus has been singing songs of peace, justice, and hope since it began in 1979. Started by the Chilean exile community who founded La Peña Cultural Center in Berkeley in 1975, the original mission of the chorus was one of solidarity with the resistance against the dictatorship in Chile. But over the years, their focus has expanded to other countries and causes, including the struggles of people in all of Latin America and the world, and to various labor, anti-racist, community, and women’s struggles closer to home.

Their music includes not only the Nueva Canción (or “New Song Movement”) of Chile, but also styles based in the folk and social justice movements of all of Latin America. They sing in nursing homes, elders’ residences, hospitals, migrant labor camps, juvenile halls, rehabilitation centers, and schools, in addition to their public concerts and performances.

In 1995, they were the first North American chorus to take part in the International Choral Festival in Santiago, Cuba. They followed that tour by visiting Chile in 1999, Mexico in 2002, Peru in 2006, Uruguay and Argentina in 2011, and Cuba again in 2017.  They also performed at the 2019 San Francisco Free Folk Festival.